Sir,
I have the honour to inform Your Excellency that I was able to enter Taipei this morning, with the help of the officer commanding the Navy post at one end of the Keelung river bridge, who overcame the obstruction of the army sentries at the post at the city end. The road through the suburbs was quiet and empty of civilians. Nearly a mile inside there was another barricade and military post. After that a few civilians could be seen, mainland Chinese and one or two Formosans. There was no firing. The bodies which had been lying in the road yesterday had been removed. A Formosan woman and her daughter came down the road from the Mackay Hospital in tears. Buses crammed with soldiers with rifle muzzles projecting from the windows careered up and down. Soldiers were loading rice sacks from a shop onto a lorry. Shops had their shutters up and offices were closed, though there was a flurry of activity around the Governor's Office. The town otherwise was silent and stunned.

2. I called at the U.S.Consulate and heard that there was no news from Nanking. I learnt with disappointment that Colonel Dew had already left for Nanking, and that through lack of liaison I had missed a heaven-sent opportunity of sending off despatches. My American colleague informed me, however, that he had discussed the situation thoroughly with Colonel Dew, not omitting views expressed in conversations which he and I had had last week, and that he had reason to expect that Your Excellency would be informed of our preoccupations here.

3. The British subjects who reside in Taipei are confined to two groups: the commercial and the missionary. I visited both and found them all well, though it was obvious that Miss Hermanson, a Canadian missionary nurse, had been subjected to severe strain shepherding wounded into the Mackay Hospital with firing going on around and at the wounded and their helpers. The British members of the UNRRA group, and Mr. and Mrs. Orr of The Shell Oil Co. live in the hills halfway between Taipei and Tamsui and had escaped these experiences.

4. Military operations in the north – if they can be graced with that name – seem to be ending, and the phase of victimisation is now being entered upon. The administration are on the track of "Communists" and “rebel." Already in Tamsui the principal of the Middle School has been led off by soldiers and has not returned, and two students have been taken away after the school had been searched. Executions with swords in the streets are reported, so far without confirmation. Miss Harmanson reported to me this morning the first known case of soldiers entering a house. They dragged out a student who was quietly reading, and he is now in hospital wounded in six places. It is to be feared that what Taipei has suffered is in store for the cities in the centre and south.

I have the honour to be, Sir,
Your most obedient, humble
Servent.
G.M.Tingle. 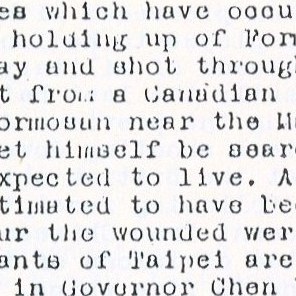 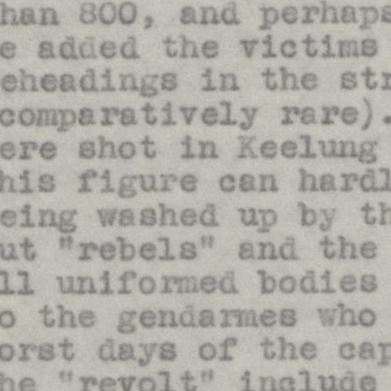